A downloadable game for Windows

Fighting game based on old 8-bit fighting games such as 'Way Of The Exploding Fist' and 'IK+'.  Combat mechanics include being able to cancel some moves (kicks) to feint an attack and switch to a different attack. In point fighting a full point is awarded for a perfectly timed blow, half point if the blow is not so clean. In full contact, a well timed blow will cause a knockdown and inflict extra damage.

The game is currently in early development, combat engine is complete.

Current background is a place-holder, more backgrounds are planned.

One on one tournament mode is planned with both point karate and full contact tournaments.

If all goes to plan, I'm considering adding an adventure mode similar to the ZX Spectrum/C64 game 'Fist II - The Legend Continues'.

Looks great. I love the fact that it's point fighting and it doesn't look like a button masher. Would be great if it had a tournament mode too.

Thanks for the interest. It's early days yet but I plan to use a similar tournament structure to the one I used in my previous game. The point fighting will be the stop - start WKF style fighting as seen in Karate Champ/Way Of The Exploding Fist, but I'll also have some continuous full contact tournaments too. I want to create some fighters that look different in both aesthetics and with some of their attacks, so I'm currently working on the sprite animations.

The game structure I'm thinking of is a series of tournaments whereby winning one you unlock another, and you get to unlock new fighters/colours etc.

It maybe too much to ask for, but in the point fighting system it would be cool to adjust the maximum and minimum set of Ippon (points) you need to win; Think Karate Champ if you could add more dots. I think WKF goes up to 5 points now, not sure.

I found game for the PlayStation One called ichigeki - hagane no hito, you might want to look at their point system as well. It's all in Japanese I think but if you look up the rules for kyokushin kaikan karate you get an idea.

Thank you for your kind words! I'm familiar with Kyokushin Knockdown rules but I'm not keen on making a game based around them as I don't like the no-head punches rules (although I understand why it's there in real tournaments). There's a nice karate game on android called Karate Do https://play.google.com/store/apps/details?id=com.MiracleDojo.KarateDoBeta&hl=en_GB≷=US with WKF style fighting and features real karate champions. Also Karate Master 2 Knockdown Blow on Steam which is based around Kyokushin.

I can definitely make it an option to be able to adjust points to win, I may offer a single customisable tournament or bout but I plan to vary the number of points to win during the course of the main campaign tournaments, just bear in mind the game isn't supposed to be an accurate karate tournament simulation. That said, just like the old 8-bit games this is based on, you get an ippon for an accurate, well placed blow (or a knockdown in a full contact match), and a waza-ari for a less accurate strike.

I just downloaded the demo for your game. I will let you know what I think about it after I play. I can't wait :)

Yes I've had Karate Do for over a year now, it's a very fun game but I'm not a fan of always online connection and microtransactions. It's still a fun game to pick up and play, I just know not to invest money into it because games like that tend to disappear from the market when the devs feel it's not making them anymore money lol. I'm fine with a one time pay for a game that's fair and understandable, but paying to keep playing is just a bonkers concept to me lol.

Your no punches to the face comment made me laugh lol. It's true though, in that game I can't punch a guy in the face no matter how much I want to lol.

Yes I'm aware your game isn't meant to be a Karate simulator, I'm fine with that, I'm more into keeping the rules of karate tournament as true to the sport as you can. I'm not saying that in this case I just mean in general.

Like I said I started to watch Cobra Kai and it renewed my interest in the Karate sport. I really like the, full point, half point, starting and stopping the fight rules, it just makes the fight more strategic in my opinion. I like street fighter and all the other fighters like it and I know there is strategy to it, but just kicking and punching to knock down a health bar has been done too much. I like your games because I have to think more and not just button mash. I don't know if you know but I bought your other karate game, I like it a lot.

Speaking of your other Karate game I have a question about that game and a comment.

Question: How do I set up my move set? I seem to do it but I don't feel like I truly know how to do it. Sometimes if I press a button and the direction at the same time it will set the move, but sometimes it won't, is that a bug or am I doing it wrong. I love the system by the way, don't change a thing on it, it's awesome!

Comment: The red letters are hard to read with that back ground. Black and white text would have been fine or some other color combination. Also is there a proper hand blocking move in the game, I seem to only weave out the way, that's cool but I'd also like to hand block like you see in the kung fu flicks lol.

Many thanks for buying Karate -  Way Of The Fist, really glad you like it!

To set your moves you first hold the button then press the direction. To remove a move, set the basic stance to that position. You need to clear a move this way before you can set a new move to a position already assigned. I maybe didn't explain it too clearly in the text file manual, sorry.

To block an attack, press up, to dodge, press down. The blocks are more of a 'functional' style rather than the flashy blocks seen in the movies.

Thanks for the comment about red text on black background - something I'll avoid in future games!

I've never been a fan of sport karate, I guess that's reflected in Karate - Way Of The Fist, but I loved the old 8-bit games as a kid so Furious Fighters is kind of a tribute to those games. I'm planning a tournament mode complete with tatami and rules for stepping off the mat (jogai). Hope you like the demo, there's still a long way to go, still adjusting the main character sprites I have now, as well as creating new characters. 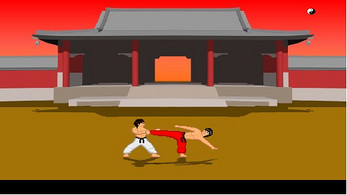